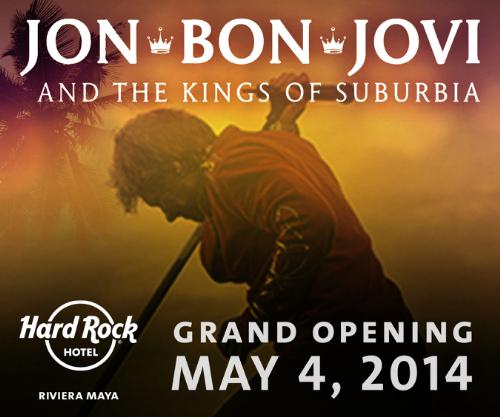 The Hard Rock Hotel Riviera Maya Grand Opening celebration will kick off on May 4, 2014 with a “star-studded Red Carpet, Hard Rock’s signature Guitar Smash and a live concert performance by Jon Bon Jovi and his New Jersey side band. The Kings of Suburbia that will be exclusive to hotel and Grand Opening VIP guests.” After the show, there will be a VIP After Party, hosted by renowned DJ Connor Cruise, at the brand new Club Heaven. The next day, May 5, will include an exclusive press conference followed by a high-energy pool party hosted by DJ Jack Novak.

Here are just a few of the highlights you can enjoy at the all new Hard Rock Hotel Riviera Maya:

Would you like to attend the Hard Rock Hotel Riviera Maya grand opening?

Siera is a travel agent with Destinations to Explore. She would love to help you plan your all inclusive getaway at no cost to you. Email siera@destinationstoexplore.com for more information or to start planning your vacation!

The beautiful Palace Resorts in Mexico has recently announced that superstar Ricky Martin is coming to the Moon Palace for a special performance at the end of the year. Palace Resorts, who has the standard in five-star, all-inclusive resort accommodations, has proudly announced Grammy-Award winning singer and entertainer, Ricky Martin will appear in concert at the Moon Palace Golf & Spa Resort on Saturday, December 28, 2013. As the leader in “awe-inclusive” vacation experiences as well as world-class entertainment, Palace Resorts will welcome the international superstar for his first concert in either the United States or Mexico in two years!
When you book a stay of five nights or more at select Palace Resorts, you will receive two complimentary tickets to the performance as part of the all-inclusive concept.
“The Palace Resorts team has worked tirelessly to bring high profile artists to Cancun, elevating our signature property, Moon Palace Golf & Spa Resort, into Cancun’s premier entertainment destination resort,” said Gibran Chapur, Executive Vice President of Palace Resorts. “After a banner 2013 that included the unveiling of a 55 million dollar enhancement project and spectacular performances by noteworthy artists, we believe closing out the year with an icon such as Ricky Martin is a testament to the superior quality experiences we wish to offer our guests. We can’t think of a better way to say goodbye to 2013 than with a holiday stay in paradise complete with an electrifying performance from Ricky Martin.”
The Moon Palace Golf & Spa Resort continues to expand the all-inclusive concept and offer you an unforgettable vacation experience by combining world-class hospitality and top-rated live entertainment with exceptional amenities and attractions. The Moon Palace is located on Cancun’s tranquil south shore between 123 acres of tropical foliage and secluded white sand beach. There are more than 2,400 waterside and garden view accommodations or golf villa suites. Multiple pools at the resort are complemented by two children’s pools, one Golf Club pool, six Jacuzzis and four swim-up bars. Additional on-site adventures include a water sports marina for sporting activities, a world-class spa, and fully equipped fitness center.  As Cancun’s premiere entertainment resort destination, Moon Palace Golf & Spa Resort has hosted world-renowned artists such as Shakira, Enrique Iglesias, Usher and Air Supply among others, in addition to spectacular shows such as Cirque Dreams Jungle Fantasy and Cirque Dreams Rocks. Moon Palace will also host performances by the legendary band Chicago, February 14 – 15, 2014, and Grammy-Award winning artist, Michael Bolton, March 29-30, 2014.
Additionally, when you book a stay of five-nights or more, you will also receive the most valuable vacation promotion on record – $1,500 Resort Credit, which can be used on room upgrades, spa and beauty salon treatments, golf outings, romantic dinners, wedding packages, and off-site excursions and tours.
Siera is a travel agent with Destinations to Explore and would love to help you plan your all-inclusive Palace Resorts vacation! Email her at spreadingmagic@gmail.com for more information!

As always, you will enjoy all of the amenities of the all-inclusive resort, but they want to make your anniversary even more special! The Palace Resorts in Mexico offer complimentary amenities to couples celebrating an anniversary during their stay. Here is what they offer as free gifts to their guests.

You can also purchase an optional anniversary package to make your time there even more special. The following are the available packages at an additional cost.

Would you like to learn more about celebrating an anniversary or romantic getaway at the Palace Resorts in Mexico? Email spreadingmagic@gmail.com!

Are you looking for the perfect honeymoon? The all-inclusive Palace Resorts in Mexico are a great option! Here are some reasons why you should consider planning your honeymoon at the Palace Resorts! Their packages, including the complimentary honeymoon package, will add a special touch to your new life together.

* Honeymoon couple must present proof of marriage within the past year.

After you check in at the front desk of your resort, you will be directed to the honeymoon desk where you will be welcomed and you will be able to reserve your candlelight dinner.

Would you like more information about spending your honeymoon at the Palace Resorts in Mexico? Contact spreadingmagic@gmail.com today!

Are you considering a destination wedding in Mexico? Check out a destination wedding at the Palace Resorts! You can expect an exquisite wedding that promises to be everything you have always dreamed your day to be and more. It’s there that your wishes and desires come to life in moments framed by luminous seascapes and boundless beauty.

From a complimentary wedding and honeymoon package to a customized day you hold in your heart forever, Palace Resorts has it all for you.

Celebrity Event Designer Colin Cowie and Palace Resorts have teamed up to revolutionize the destination wedding industry. For the first time, anyone can have a Colin Cowie experience with sophisticated, customized, chic wedding packages featuring every inclusion at an unbelievable price at any of their 6 luxurious All-Inclusive resorts.

You and your wedding party will all enjoy the freedom to enjoy unlimited food and beverage, nightly entertainment, 24-hour room service, a liquor dispenser and minibar in your guest room and an abundance of other services and amenities, without concern for cost. It’s all covered in the All-Inclusive features, even all taxes and gratuities.

The Palace Resorts has locations in Riviera Maya, Cancun, Isla Mujeres, and Cozumel. The Palace Resorts have received awards including Orbitz Best in Stay, AAA Five Diamond Award, and Travelers Choice Award.
Would you like to learn more about having a destination wedding or honeymoon at the Palace Resorts? Contact spreadingmagic@gmail.com today!