Frozen has taken the country by storm and the phenomenon still seems to be getting stronger every day! Frozen will be coming to Disney California Adventure Park early next year when Frozen Fun at Disneyland Resort makes its West Coast debut on January 7, 2015. Frozen Fun at Disneyland will bring magical adventures with Frozen characters and brand new, immersive experiences that you won’t want to miss! 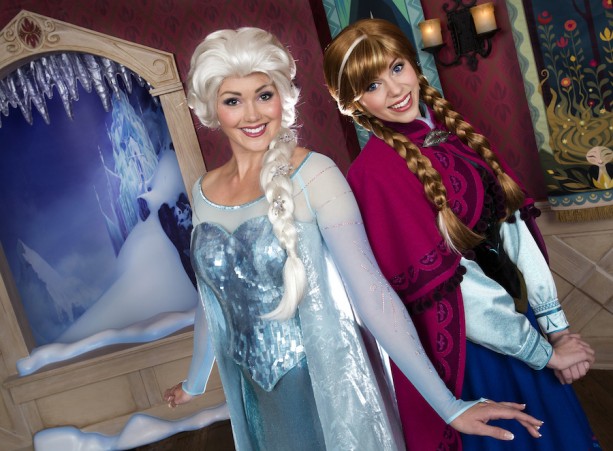 A sneak peek of many of these exciting experiences begins this Saturday, December 20! Starting January 7, 2015, the “Frozen Fun” officially opens at Disney California Adventure park, and a new “Frozen” show makes its debut in Fantasy Faire at Disneyland park.

The Royal Theatre’s resident storytellers, Mr. Smythe and Mr. Jones, present the tale of “Frozen” in a fun-filled, fast-paced retelling of the story, featuring their own wacky performances in key roles, along with Anna, Elsa and the Faire Maidens. And when Mickey’s Soundsational Parade resumes daily performances January 7, Anna and Elsa will once again make pre-parade appearances on their own special float.

When Storybook Land Canal Boats returns later this month, there will be a new excursions through the world of “Frozen” offering views of the fjord-side village of Arendelle, including the stately castle where Anna and Elsa grew up, Wandering Oaken’s Trading Post, and Elsa’s mountaintop ice palace. The miniature locales of “Frozen” will find a new home among the familiar scenes of some of Disney’s most enduring and timeless fairy tales, including “Pinocchio,” “Cinderella,” “Aladdin,” and “The Little Mermaid.”

Plus, don’t forget about Olaf’s Frozen Ice Rink though February 22, 2015 and the new Anna and Elsa’s Boutique, both now open now at Downtown Disney District. For “Frozen” fans, there’s never been a better time to visit Disneyland Resort! Which of these new experiences are you most excited to see?