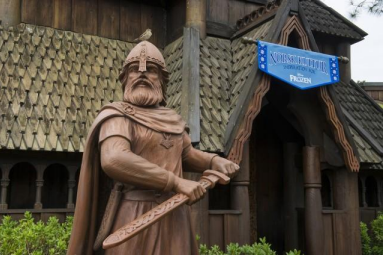 New! New Display at the Stave Church Gallery in Epcot’s Norway Now Open: Guests will discover a new gallery exhibit exploring how the culture and beauty of Norway inspired the creators of Disney’s “Frozen.” The new gallery show takes a look at how old Norway artifacts have inspired current design motifs, which are then reflected in the design of the world of Disney’s “Frozen.” Inside the new gallery, Norsk Kultur, Guests will find:

New! Gingerbread Creations at The Land: On Dec. 2, The Land Pavilion will be showcasing the work of Disney pastry chefs who have created gingerbread icons from Disney parks and resorts around the world.

New! Support Toys for Tots by Donating a Toy at Disneyland Resort: This December, make the holiday season brighter for children in need throughout Orange County, Calif., by donating a new, unwrappedtoy valued at $10 or more at the  Disneyland Resort! Toy collections will take place December 1 – 14 at the World of Disney store, Disneyland Resort hotels and various locations at the Downtown Disney District. Members of the U.S. Marine Corps Reserves and Anaheim Fire and Rescue will be on hand December 7 and December 14 from 11:30 a.m. – 5 p.m. to collect toys at the west end of Downtown Disney District, by AMC Theatres and ESPN Zone.

Universal Holidays will begin Dec 7th, so we will have more updates on that next week!