There are new things popping up every day at the Walt Disney World Resort and Universal Orlando Resort. This week features a several new Disney stores and kiosks, live entertainment offerings, and big celebrity guests at Star Wars Weekend. At Universal, we’ve got a look at the amazing new food offerings coming to Diagon Alley, a free concert by Robin Thicke and much more!

New! Anna and Elsa Meet and Greets Extended: Great news for fans of Anna and Elsa from Disney’s Frozen! As of June 1, Anna & Elsa will greet Guests at Princess Fairytale Hall from park open to 30 min prior to close. Additional Fastpass+ reservations have been made available for the additional hours they are expected to be greeting guests.

New! United World Soccer Opens: The space that formerly was BLINK by Wet Seal has re-opened as United World Soccer. Just in time for the 2014 World Cup, it offers soccer fans their favorite team jerseys, as well as sports gear, cleats, World Cup apparel and accessories.

Reminder! Kiosks Now Open at Downtown Disney: Wetzel’s Pretzels and Häagen-Dazs kiosks are now open between DisneyQuest and Cirque du Soleil. Wetzel’s Pretzels and Häagen-Dazs are open: Monday-Friday: 10:30 a.m. – 11 p.m, and Saturday-Sunday: 10:30 a.m. – midnight Over in the Marketplace, you can grab a cup of your favorite coffee – with a brand-new Starbucks kiosk open now and everyday 8 a.m. – midnight.

New! Festival of the Lion King Returns to Disney’s Animal Kingdom: “Festival of the Lion King,” the popular musical stage show that originated at Disney’s Animal Kingdom in 1998, debuted at the brand-new Harambe Theatre in the Africa section of the park on June 1. While the theater is new, the show remains otherwise unchanged.  The show is a daily park offering and is performed multiple times a day (check your My Disney Experience App or the park’s Times Guide for show times).

Reminder! Harambe Nights Premieres June 7:  In celebration of the 20th anniversary of The Lion King, Disney’s Animal Kingdom Theme Park will host Harambe Nights every Saturday evening June 7-August 9. The event will kick off at 7:00pm with a welcome reception followed by a 7:30pm concert in the new Harambe Theater where iconic scenes from the film will be recreated while a celebrity narrator and a live orchestra, choir and dancers provide a never-before-seen take on The Lion King tale. The celebration will continue after the concert on the streets of Harambe with food, exclusive merchandise and an opportunity to “Go Wild” and dance and interact with live performers. You can purchase tickets at Disneyworld.com/HarambeNights or by calling 407-939-1319 for $119 for adults and $79 for children, plus tax. Premium seating is available for $134 for adults and $94 for children, plus tax. The celebrity narrator for the premiere is Viola Davis, known for her roles in “The Help” and “Ender’s Game.”

New! Richard Petty Debuts Piston Cup Junior Ride-Along Cars June 14: Two vehicles from the “Cars” franchise, Aiken Axler and Sage VanDerSpin, are about to make their debut at the Richard Petty Driving Experience at Walt Disney World Resort as a part of the new Junior Ride-Along program. In it, children ages 6 to 13 (and at least 48 inches tall) will have the chance to experience real-life racing excitement as they ride shotgun with a professional driving instructor for three thrilling laps in a specially equipped Piston Cup race car. Junior Ride-Alongs do not require reservations and are given on a first-come, first-served basis. Find more, visitDrivepetty.com or call 800-237-3889.

New! Changes to Tusker House Dining Hours: Beginning Sunday, June 8, Tusker House at Disney’s Animal Kingdom Theme Park will be extending their lunch meal period. The new hours align with the typical lunch and dinner meal period across Walt Disney World Resort. Lunch will be offered 11:00am – 3:30pm and dinner beginning at 4:30pm. Breakfast will continue to be offered 8:00am – 10:55am.Character dining with Donald Duck and his friends will continue to be offered at breakfast and lunch only. Additionally, for the evenings this summer when Harambe Nights will be hosted at Animal Kingdom (every Saturday, June 7-August 9) dinner meal periods will not be available at Tusker House due to the early closure of the land.

New! Sounds Like Summer Concert Series Returns to Epcot June 8: Rock out to the sound of stadium-style shows amidst an old-fashioned American backdrop. From renditions of songs from U2 and the Eagles to covers of classics by Bon Jovi and the Bee Gees, you’re invited to enjoy all the hits flying forth from America Gardens Theatre. It’s a blast by yourself or fun for the whole family! All performances take place at America Gardens Theatre in World Showcase at 5:30, 6:45 and 8 p.m. – except on July 4 (when show times are 5:15, 6:30, 7:45 and 9 p.m.). Concerts are included with park admission and entertainment is subject to change.

New! Diagon Alley Food and Beverage Options Revealed: We’ll all have the opportunity to actually step inside places you’ve only seen in the films and read about in the books and actually taste some of the foods and drinks your favorite characters have enjoyed! First up is the Leaky Cauldron, which will look just like it does in the films…all the way down to the huge cauldron that sits in the middle of the restaurant.  Here, you’ll be able to enjoy delicious British fare like…

And you can finish off your meal with scrumptious desserts like Chocolate Potted Cream, Cranachan and Sticky Toffee Pudding.  There will also be breakfast served at the Leaky Cauldron with two new breakfast items, only available at Diagon Alley: an Apple Oatmeal Flan with Yogurt and Fruit and an Egg, Leek and Mushroom Pasty.

There will also be new beverages for you to enjoy in Diagon Alley like:

Another must-stop during your trip to Diagon Alley will be Eternelle’s Elixir of Refreshment, a cart located in Horizont Alley, where you can enjoy unique elixirs. Here’s how it works:  you select from a variety of elixirs like Draught of Peace, Babbling Beverage, Elixir to Induce Euphoria and Fire Protection Potion, and then add the elixir to Gillywater.  By mixing them, you’ll see your drink transform before your eyes and experience a delightful flavor surprise. Too cool!

And of course, to top it all off, you have Florean Fortescue’s Ice-Cream Parlour. You may remember Florean Fortescue’s from the first book and film “Harry Potter and the Sorcerer’s Stone” when Hagrid bought Harry a chocolate and raspberry ice-cream with chopped nuts. You’ll be able to do the same with unique flavors of ice-cream like… 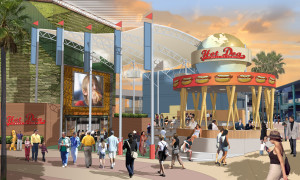 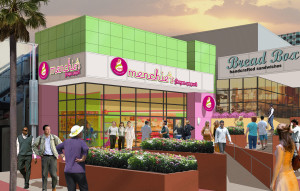 New! Universal Orlando Released Another Diagon Alley Video: Universal Creative President Mark Woodbury takes you behind the scenes and talks about the vision behind the all-new Wizarding World of Harry Potter- Diagon Alley.

New! Harry Potter Vacation Package Details Announced:  Universal recently released the new Harry Potter vacation package. After June 29, guests booking this package will get breakfast at both the Three Broomsticks and the Leaky Cauldron and a special welcome parcel. The welcome parcel will be given to you at check-in at the hotel. This EXCLUSIVE Vacation Package Includes: