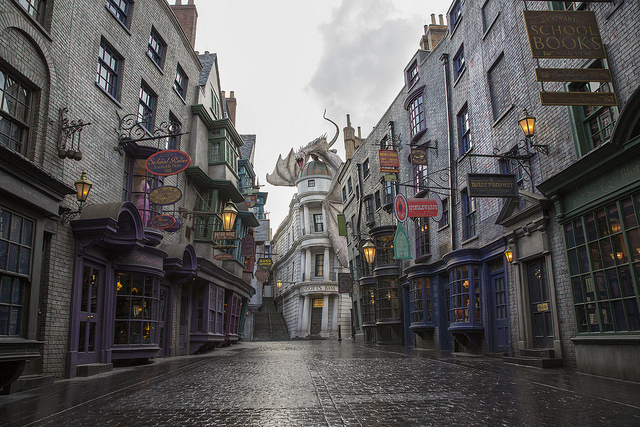 1. Join Your Favorite Wizards on Harry Potter and the Escape from Gringotts

Plunge into the depths of Diagon Alley’s famed Gringotts bank as you encounter dragons, trolls, and Voldemort himself.

Witches and wizards can practice their spell casting throughout The Wizarding World of Harry Potter – Diagon Alley. Haven’t had a wand choose you yet? Be sure to check out Ollivanders or Wands by Gregorovitch when you arrive.

3. Become an actual Minion on Despicable Me Minion Mayhem

Gru is recruiting Minions for his latest scheme, and good news: it looks like you’re the perfect candidate.

4. Head to Studio 6B for Race Through New York Starring Jimmy Fallon

Visit the famed Studio 6B for a unique tour of the Big Apple. Don’t forget to stop and smell the pizza.

Select a song and prepare to rock on this coaster that takes you up a 90-degree angle before dropping you back down at 65 mph.

6. Help Optimus Prime and Bumblebee save mankind on Transformers: The Ride 3-D

It’s time for someone to take down Megatron and the Decepticons, and that someone could be you.

7. Dare to Eat an Entire Lard Lad Donut in The Simpsons’ Springfield, U.S.A.

8. Flee From the Evil Imhotep on Revenge of the Mummy

Forwards or backwards – you’ll barely be able to tell which way you’re moving on this dark coaster. All you’ll care about is avoiding the swarm of insects, mummies, fire…

9. Boogie down with popular characters in the Superstar Parade

Seriously. Where else can you dance with Gru and the Minions, Dora and Diego, plus the one and only SpongeBob SquarePants?

10. Wipe out the scum of the universe on MEN IN BLACK Alien Attack

Aliens have taken over New York and we’re arming you with a blaster to zap them into oblivion. Rack up points and get ready for a lifetime of bragging rights.

What are your favorite must do’s at Universal Studios Florida experiences? Tell us in the comments below!