New! Feel The Force Premium Package at Star Wars Weekends: Just announced today, a new VIP package experience will be available to guests at Star Wars Weekends this year (every Friday-Saturday-Sunday, May 16 through June 15, 2014). This new experience provides Guests with reserved VIP viewing for two of the most popular Star Wars Weekends event spectaculars: the daytime Legends of the Force Celebrity Motorcade and the nighttime Symphony in the Stars fireworks show. In addition to premium viewing  soft drinks, water and snacks will be served for the motorcade and a dessert party will accompany the fireworks show. Guests will also receive a souvenir digital photo card that captures images of the Star Wars characters and events from that day as well as a series of complimentary Star Wars photos. Price: adults $54, children $32 (per day, tax and gratuity included). Discounts do not apply.

New! Guest Mobile Phone Charging Lockers Open April 25: Starting Friday, April 25, a test will take place at Magic Kingdom Park, allowing Guests to charge the batteries on their mobile phones at a limited number of secure lockers located in Tomorrowland. Charging lockers are located inside Cosmic Ray’s Starlight Café (near the Fantasyland entrance) and the Tomorrowland Light & Power Company (Space Mountain shop, near the D-Tech offerings). This is a free service. This offering is a test and will continue through mid summer. Guests will use their credit card like a key. They will not be charged.

New! Walk-around Dinosaur Entertainment at Disney’s Animal Kingdom: A new atmosphere entertainment offering is currently being tested at Disney’s Animal Kingdom. Per Cast Member notes, several times a day, Guests visiting DinoLand U.S.A. may encounter Professor Parker Woodson from the Dino Institute, along with his velociraptor, affectionately named “V,” as they embark on a “Jurassic jaunt” through the land. Guests interacting with Professor Woodson will learn that he has hand raised “V” from birth and is looking forward to Guests getting to meet his dinosaur. When we saw this entertainment offering on April 20, the human was referred to as Dr. Woodson (and it was a woman, not a man as the description indicates) and the dino was referred to as “Val.” “Val” walked through DinoLand U.S.A. and made loud velociraptor sounds when prompted by Dr. Woodson. 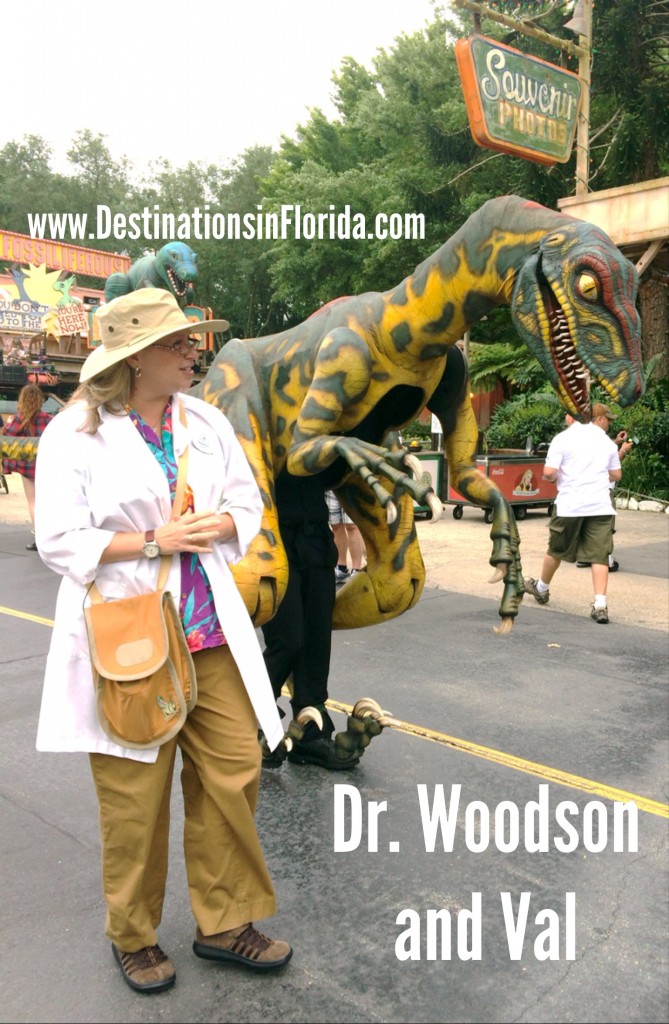 New! Seven Dwarfs Mine Train News: On April 22, 2014, vehicles were spotted on the tracks in test runs of The Seven Dwarfs Mine Train at Magic Kingdom in Walt Disney World. We have seen the vehicles testing several times previously and shared videos before, but this time something was different! There were guests riding in them now! Well, not exactly guests, but actors. A commercial was being filmed for the new attraction. We hope this means it will be open to the public soon, but there is still no opening date scheduled. The official dedication of the Seven Dwarfs Mine Train is scheduled for May 2. We hope to see soft openings very soon! 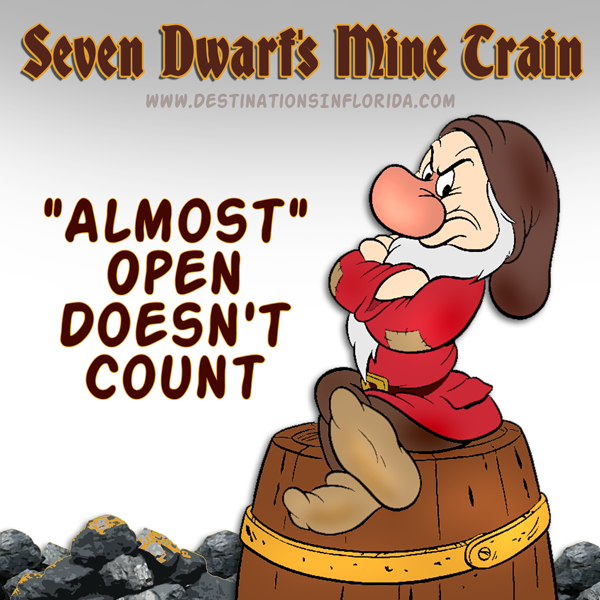 New! 2015 Walt Disney World Marathon Weekend Registration Open: On April 22, registration opened to the public for the 2015 WDW Marathon Weekend events, which include a 5K, 10K, Half Marathon and Full Marathon. In addition, there is the “Goofy’s Race and Half Challenge,” which is comprised of running the Half and Full Marathons and the “Dopey Challenge,” which consists of running all 4 races. At the time of this writing, all events are sold out except for the Full Marathon and the “Goofy.” 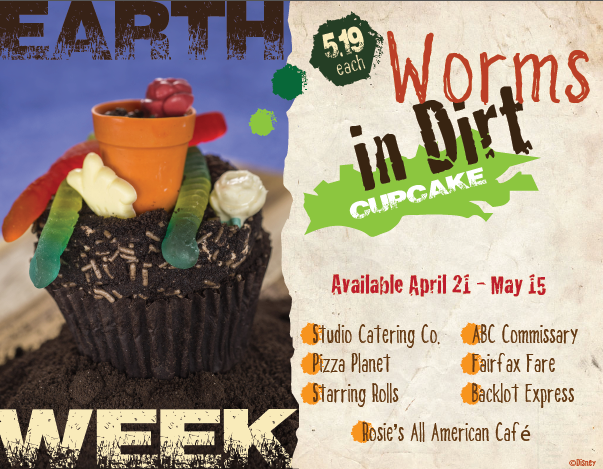 New! Frozen-themed Pastries Available in Epcot Norway: Frozen-themed cookies and rice krispy treats can now be found in Norway. They have previously been available in MouseGear in Epcot and the Main Street Confectionery at Magic Kingdom.

New! Wine on Tap at Disney’s Contemporary: The Wave…of American Flavors is now featuring a variety of wines served on tap. The Wine on tap concept is an environmental initiative that the restaurant opted as a unique way to serve well known quality wines. Wines served on tap are fresher than any other method of serving wines because the wines kept in kegs don’t come in contact with air. The restaurant is currently serving Smith & Hook Cabernet Sauvignon from Central Coast California, Acrobat Pinot Noir by King Estate from Oregon, J Vineyards Pinot Gris from Russian River Valley and NxNW Riesling from Oregon. These will be changing on a regular basis.

Reminder! Anna and Elsa from ‘Frozen’ Now Meeting Guests at Magic Kingdom Park: Anna and Elsa, from Disney’s Academy Award-winning film “Frozen,” have moved from Epcot to Magic Kingdom Park as of April 20. They join some of their fellow Disney Royals at Princess Fairytale Hall, where Disney FastPass+ service will be available for this character greeting experience. As part of this new arrangement, Snow White will appear in Town Square Courtyard at the beginning of the day, returning to Princess Fairytale Hall in the evenings. 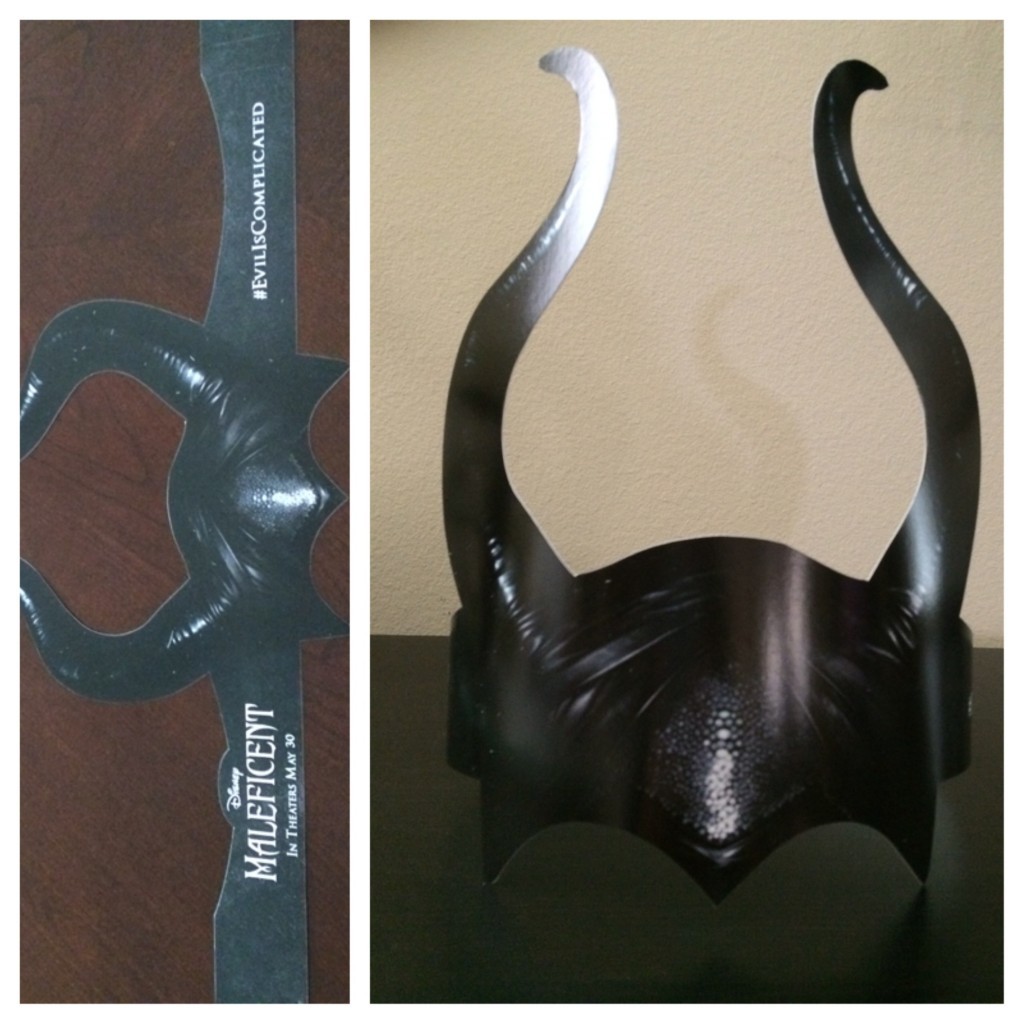 Reminder! Grand Floridian Rooms Under Refurbishment: Guest rooms and buildings throughout Disney’s Grand Floridian Resort & Spa have been under refurbishment since early January and the project is scheduled to complete in August. Guest buildings will be taken out of inventory and will not be occupied by Guests while work is being performed. Next building to start refurb is Sago Cay – April 27.

Reminder! Epcot After Hours Wind Down Events: You are invited to relax, unwind and enjoy exclusive access to one of four favorite lounges around World Showcase during the new Epcot After Hours Wind Down, beginning April 17 through Sept. 15. This celebration takes place Thursday through Sunday evenings beginning after IllumiNations: Reflections of Earth and continuing until 11 p.m. Following IllumiNations: Reflections of Earth, take your pick from four select locations and enjoy cuisine created from award-winning Epcot Chefs and Sommeliers. Tickets can be reserved for the Epcot After Hours Wind Down in advance for one of the following locations around World Showcase: La Cava del Tequila – Mexico, Rose & Crown Pub – United Kingdom, Spice Road Table – Morocco, and Tutto Gusto Wine Cellar – Italy.

Reminder:  Epcot International Flower & Garden Festival Continues: This fantastic and colorful festival continues. Here are some of the highlights this week: Flower Power Concert Series performances by Herman’s Hermits starring Peter Noone – April 25-27 at 5:30, 6:45 and 8 pm.; Designers’ Stage – weekdays, noon and 3 pm will host Steve Aitken, How to Buy Mail Order Plants (12 p.m.) 10 Ways to Mess Up Your Garden (3 p.m.) – April 22-24; and Designers’ Stage – Presented by HGTV – Friday-Sunday, noon and 3 pm will host David Bromstad, Color Splash – April 25-27. Numerous additional presentations take place daily through the day during the entire festival which runs through May 18. 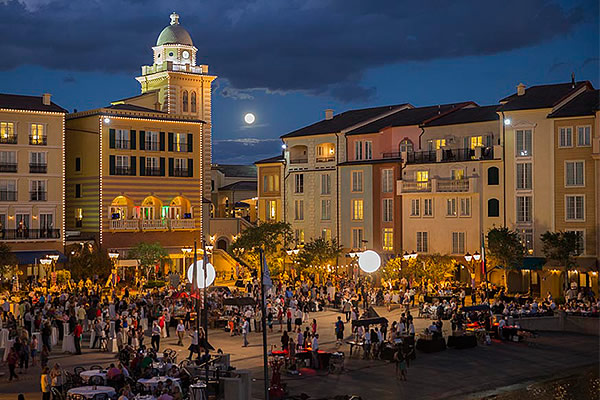 New! Universal Vacation Discount: For a limited time, Universal Orlando Resort has offered a new discount vacation offer called the “2 Park, 3 Night Getaway.” From only $315 per adult, you can experience an unforgettable journey through Universal’s Islands of Adventure, including the Wizarding World of Harry Potter! And, right next door, at Universal Studios, you go behind the scenes, beyond the screen, and right into the action of your favorite movies! You can experience it all in one, unique discount vacation package! With this amazing offer, you can choose from free airport transportation or a free $50 gift card. Plus, receive a 3rd day ticket for free if you book by May 9th.  Act fast as there is a very limited booking window!

Reminder: Two Sold Out Concerts at Universal Hard Rock Live: On Monday, April 28, Lana Del Rey will be performing. Both shows are already sold out.

Reminder! Impact Wrestling Taping Select Dates March through May: Guests can watch Impact Wrestling live events and tapings at Universal Orlando April 27 – 28, and May 7 – 10. Impact Wresting events are first-come, first-served. Please note: Taping times are subject to change, so for the most up-to-date information please call 407-224-6000. Numbered tickets will be distributed starting at 10 AM at the CityWalk Blue Man Group walkway. These tickets are your spot in line, therefore the earlier you pick them up, the closer you will be to the front of the audience line. You will then be able to enjoy your day in the park or CityWalk and come back at the time the attendant tells you. Numbered tickets are limited to 10 per person.