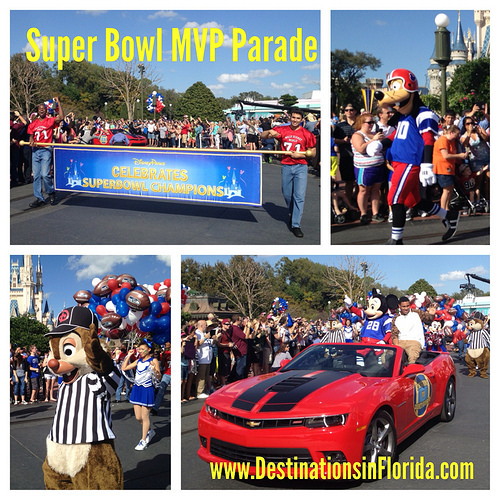 New! Special “Valentine’s Day” Items on Walt Disney World Resort Menus: Though completely unadvertised, you may find there to be special Valentine’s items on some Walt Disney World Resort menus. When you call 407-WDW-Dine, they will have no information on these items. They appear to be at the complete discretion of the restaurant. One that we have come to know and love in recent years is found at Kona Cafe. It’s Red Velvet Pancakes with Cream Cheese Topping, Choice of Bacon or Sausage! The price in the past was $9.99. We’re checking them out on Thursday, Feb 6th! Items such as this may appear or disappear from the menu at any time. 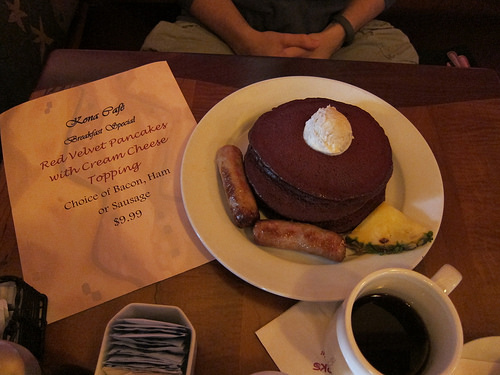 New! Update Coming to My Disney Experience App: a new, significant update of My Disney Experience will be available soon for Apple devices. (The corresponding update for Android devices will be released this spring.) With this update, the app’s performance will be improved significantly, and the ease of navigation will be enhanced. Additional enhancements in this update to the Apple app include the following.

New! Mechanical Kingdoms ~ Steam-Driven Visions of a Victorian Future Art to Debut at Disney Parks: Steampunk and Disney fans alike, this one’s for you! On February 22, The Disney Gallery at Disneyland park will unveil a new exhibit titled Mechanical Kingdoms ~ Steam-Driven Visions of a Victorian Future. Steampunk, a subgenre of science fiction loosely built around retro-futuristic visions of a steam-powered society, has been gaining popularity over the past several years. If you are a fan of Steampunk then mark your calendar now, because as part of the Steampunk launch, we will host artist signings at Disneyland Resort and Walt Disney World Resort. Disney Design Group artists, Costa Alavezos, Alex Maher and Mike Sullivan will appear from 2-5 p.m. at Art of Disney in Downtown Disney Marketplace on Feb 22. 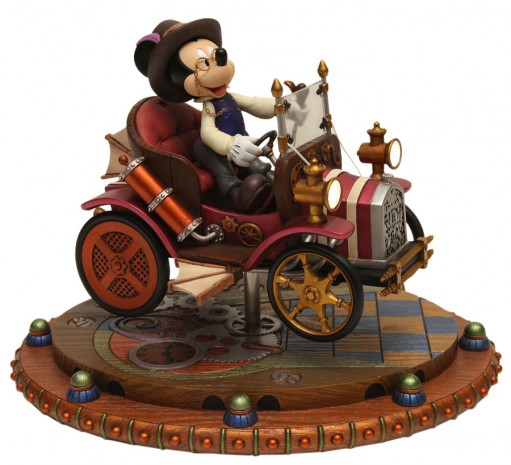 New! Portable Mobile Phone Chargers Sold at Walt Disney World: If your cell phone or tablet is in need of a charge, you can now purchase portable chargers in various Merchandise stores in the theme parks and resorts. As we become more reliant on our mobile devices for MyMagic+, it’s a good idea to pick one of these chargers up. 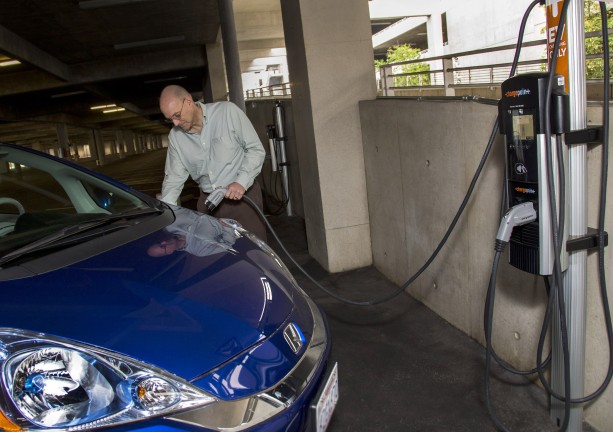 Electric Vehicle Charging Stations Now Available at Disneyland Resort: Twenty ChargePoint charging ports have been installed on the first floor of the Mickey & Friends parking structure for guests with electric vehicles! Guests can begin using them today by scanning their ChargePoint card or by easily registering for a free ChargePoint account at the charging station, or online at http://www.chargepoint.com. Guests arriving at the Mickey & Friends parking structure can ask a cast member for directions to the charging stations. Separate charging stations are also available to cast members for a total of 30 charging ports at the resort.

New! Mechanical Kingdoms ~ Steam-Driven Visions of a Victorian Future Art to Debut at Disney Parks: Steampunk and Disney fans alike, this one’s for you! On February 22, The Disney Gallery at Disneyland park will unveil a new exhibit titled Mechanical Kingdoms ~ Steam-Driven Visions of a Victorian Future. Steampunk, a subgenre of science fiction loosely built around retro-futuristic visions of a steam-powered society, has been gaining popularity over the past several years. If you are a fan of Steampunk then mark your calendar now, because as part of the Steampunk launch, we will host artist signings at Disneyland Resort and Walt Disney World Resort. Meet artists Dave Avanzino, Jim Crouch, Jeremy Fulton, Brian Kesinger, Noah, Mark Page, Michael Peraza and Javier Soto from 9 – 11 a.m. at Disneyana.Disney in Downtown Disney Marketplace on Feb 22. 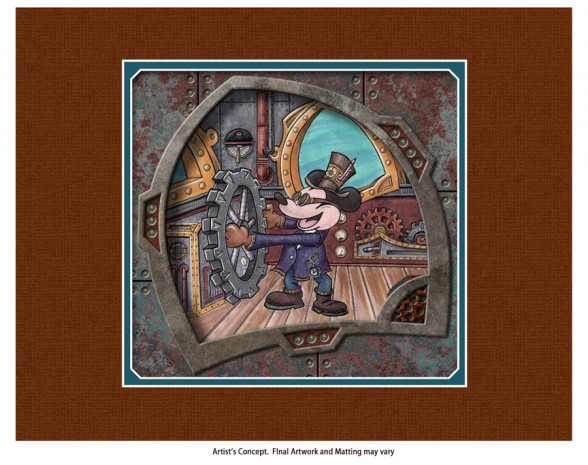 New! Antojitos Authentic Mexican Food Grand Opening at CityWalk February 5: Take a journey through the cantinas, street carts, and markets of Mexico City for the best food you’ve never had at Antojitos Authentic Mexican Food. Only the freshest ingredients–diced, marinated, roasted, or grilled to perfection–are used to create the craveable Mexican street food fare that fills your senses and satisfies your hunger. 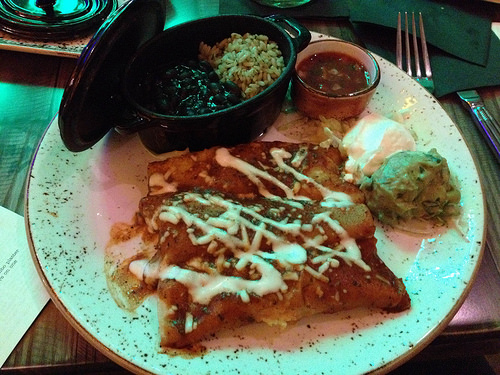 New! Additional Mardi Gras Concert Series Lineup Announced: It’s the most spectacular celebration of the Big Easy spirit outside of New Orleans itself – Mardi Gras at Universal Studios®. Bring the whole family for a party filled with music and fun as only Universal Orlando® Resort can throw. Feb 8 – May 21, 2014. This year’s concerts include Robin Thicke (Feb 22) and The Wanted, May 10, plus 18 other concerts:

New! Harbor Nights Returns to Portofino Bay Hotel Feb 7: Experience a luscious pre-Valentine’s party at Portofino Bay Hotel’s Harbor Nights Romantico, a wine, food and music event designed to capture the romantic ambiance of the Mediterranean. Featuring 15 select wines and sparkling wines, gourmet foods, and live music by The Buzzcatz, Harbor Nights takes place under the twinkling lights of the majestic Harbor Piazza. You can view the menu (PDF file) or you can purchase tickets online. General admission: $45 in advance/$55 at the door
VIP/reserved tickets: $75 online only (reserved seating includes private wine station, passed hors d’oeuvres, plus all the benefits of a regular Harbor Nights ticket!) For more information and reservations or call 407-503-1200.

New! B-Street Band – A Night of Springsteen to Play Hard Rock Live at Universal Orlando: Sat Feb 8, 8:00 pm. The HARDEST WORKING & LONGEST RUNNING tribute band with an average of 200 performances/year over the last decade! Originating out of NJ, the BStreetBand is the ONLY Springsteen Tribute to perform with E Street Band members Miami Steve, Max Weinberg, Garry Tallent, Vini “Mad Dog” Lopez, and the Big Man Clarence Clemons. Yes, even the Boss himself has seen the band. The band has opened outside for Bruce at several venues including Wells Fargo, the Prudential Center, Izod Center, Wachovia Center, XFinity Live , and on the steps of the Philadelphia Spectrum’s final 4 shows. COST: $10 Reserved Seating, General Admission Standing Perimter FREE with GA Ticket.

Siera is a travel agent with Destinations to Explore, an authorized Disney Vacation Planner and Universal Orlando Agency of the Year 2010, 2011, and 2012. She would love to help you plan your next vacation at no cost to you. Request your free, no obligation quote on the right side of the page or email siera@destinationsinflorida.com for more information.