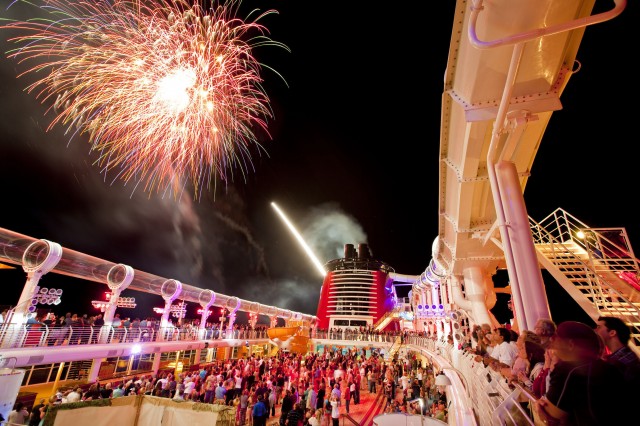 When planning a family vacation, there are often many ages and tastes to please. One of the amazing things about a Disney Cruise Line vacation is that there are Disney Cruise Line activities available for every member of the family. On a Disney cruise, adults can treat themselves to indulgence and relaxation while children can enjoy immersive, magical adventures with their favorite characters. Then, together as families, they create memories that last a lifetime. The moment you are welcomed aboard any of the Disney ships, you embark on a journey full of legendary Disney service and attention to detail, incomparable entertainment and unforgettable dining. When you plan a Disney Cruise Line vacation, you will have a vacation experience that feels like it was created just for you!

On Disney Cruise Line, there is fun for all ages, happening both day and night, including original theatrical productions, adventurous deck parties, fireworks at sea, movies on the deck’s giant screen, first-run films (including some in digital 3-D for the first time at sea), exclusive Disney character experiences, and much more!

Broadway-style musicals are offered every evening at the spectacular Walt Disney Theatre, a 1,340-seat performing art palace on the Disney Fantasy and Disney Dream, 977-seats on the Disney Magic and Disney Wonder. There are original productions distinctive to each ship as well as guest-favorite shows that can be enjoyed on more than one ship.

In addition to stage shows, Disney Cruise Line offers a host of special parties, including the adventurously themed deck party, Pirates IN the Caribbean. With stunt performers rappelling from atop the funnel, an epic battle at sea ensues as the good guys take on the villains. Disney characters such as Captain Hook, Mr. Smee, Captain Mickey, Minnie and Goofy join guests for a raucous good time, complete with music and dancing. Plus, as part of the nighttime fun: a spectacular pyrotechnics performance—fireworks at sea like only Disney can do!

Fun for Children, Tweens and Teens

Aboard Disney Cruise Line ships, it’s great to be a kid. Children can let their imagination sail free in nearly an entire deck customized just for them, tweens and teens have places to kick back and the smallest seafarers are cared for in a colorful space with an under-the-sea theme. Dedicated, age-specific areas and customized, interactive programs inspire, entertain and spark the imagination of children ages 3 months to 17 years.

While children are enjoying the most extensive youth activity areas at sea, parents can enjoy the ship “worry-free,” thanks to complimentary use of wave phones that allow crew or kids to contact parents anytime and anywhere on the ship. Plus, all Disney Cruise Line youth activities are supervised by specially trained, dedicated counselors and feature some of the longest operating hours at sea, providing greater flexibility for parents and even more fun for kids.

Disney Cruise Line offers adult cruise passengers upscale and sophisticated experiences designed just for them. From elegant dinners … to backstage tours … to the exclusive Quiet Cove pool, adults will find endless ways to relax and enjoy themselves in areas set aside just for them.

Relaxation and rejuvenation take control at Vista Spa and Salon (Disney Wonder) and at Senses Spa & Salon (Disney Dream, Disney Fantasy, Disney Magic), where the only thing more indulgent than massage, body wrap and pedicure is enjoying a treatment in a “spa villa” complete with an indoor suite connected to a private outdoor verandah with personal hot tub and open-air shower.

Uniquely themed restaurants are as delightful as they are delicious. While guests “rotate” through different restaurants each night, the same servers accompany them. This rotational dining takes guests through a variety of dining experiences and menus while providing friendly, familiar, personalized service each night.

Most Disney Caribbean and Bahamian cruises lead to the magical shores of Castaway Cay, a private island paradise exclusively for Disney Cruise Line guests, with activities and areas for families, teens and adults.

On a Disney cruise, staterooms are family-size, immaculately appointed with a nautical Disney flair and smartly designed to let guests stretch out in style and comfort. As an added convenience, most staterooms feature a “split bath-and-a-half” with a sink and tub/shower in one room and a sink and toilet in a separate room.

What are your family’s favorite Disney Cruise Line activities?