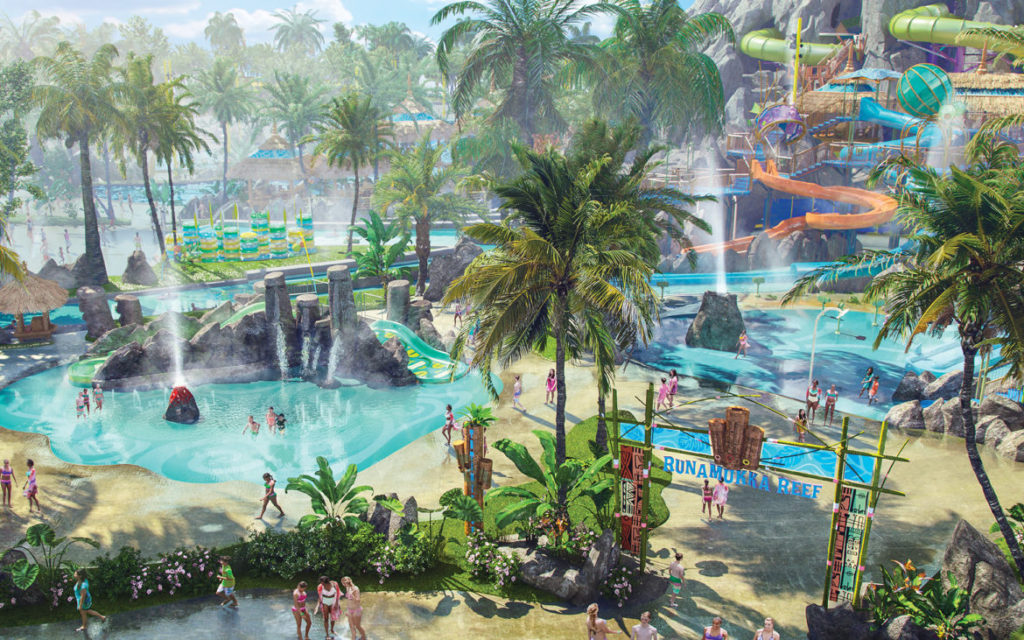 Discover the Story Behind Volcano Bay at Universal Orlando Resort

Whenever we create a new ride or land, an incredible story is always our starting point. And while creating an immersive, one-of-a-kind water theme park seemed like a challenge in itself, we knew amazing storytelling would be at the core of our creation.

Today, I’m sharing with you the inspiration behind this tropical paradise and introducing you to the Waturi, the islanders who call Volcano Bay home. 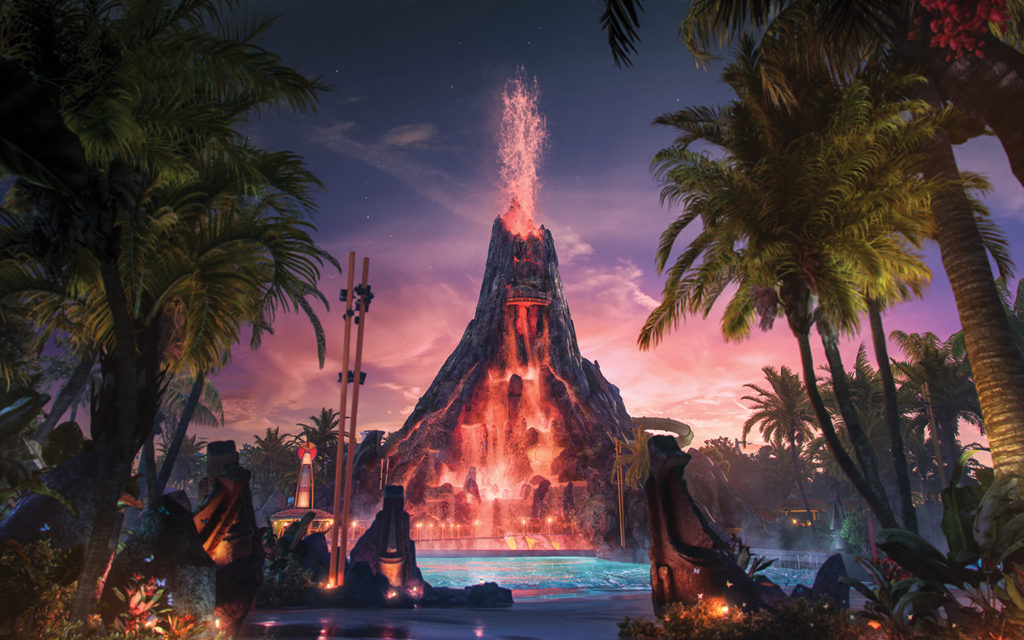 It all began with the fiery god, Krakatau (kra-kuh-TAU). Though his wrath and fury dominated the land, he couldn’t contain the adventurous spirit of his daughter, Tai Nui (tie-NOO-ee). She fell in love with a native youth named Kala (KAH-lah). And when her fiercely protective father learned of the romance, he flew into a rage. He banished Kala forever to the sky, where he became the Moon.

Overcome with grief, Tai Nui’s tears became the Sea. Krakatau then realized he had only succeeded in destroying what mattered most to him: his daughter’s happiness. Determined to reunite the young lovers, he reached into the earth and pulled it to the sky – creating the volcano of Volcano Bay. Krakatau trapped the remains of his anger and jealousy in the form of the fire spirit, Vol, whom he imprisoned deep within the volcano.

This is how the Sky, Sea and Earth united to form the paradise of Volcano Bay. 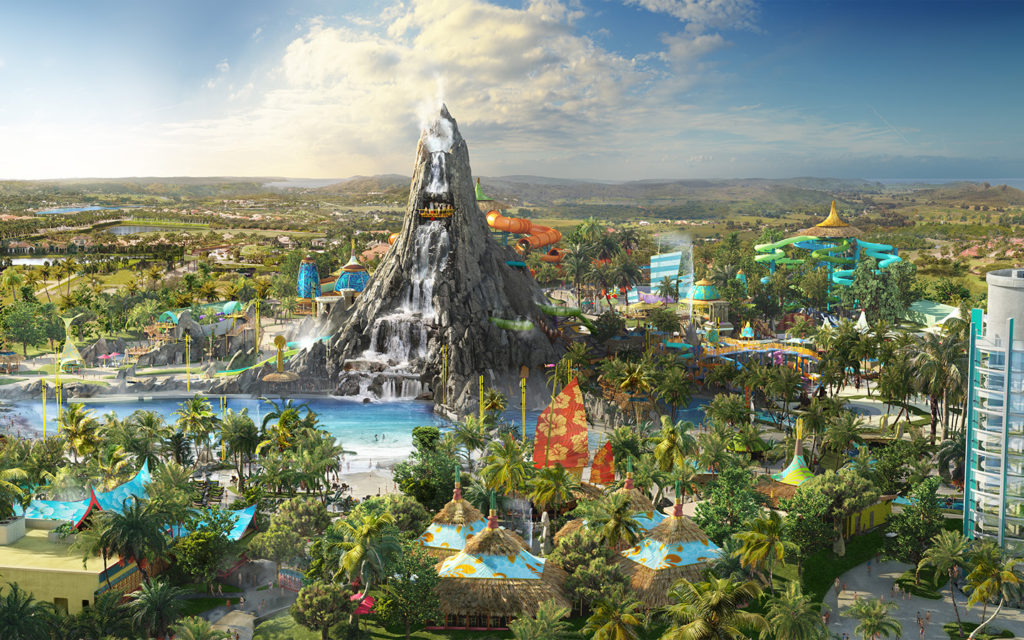 Before they came to Volcano Bay, the Waturi (wah-TOO-ree) traversed the ocean in outrigger canoes in search of a new home. According to the legend, a mystical fish named Kunuku (koo-NOO-koo) was destined to guide them.

Their voyages took them to the far corners of the South Pacific. And wherever they went, the Waturi embraced the customs, music and art of the many people they encountered. But alas, nowhere did they find Kunuku.

On and on they searched, until they came to the very edge of the world. And it was there that they found Kunuku playing in the waves. Within a day, Kunuku and the winds of fortune lead the travelers to the shores of Volcano Bay. The Waturi knew that, at long last, they had found home. 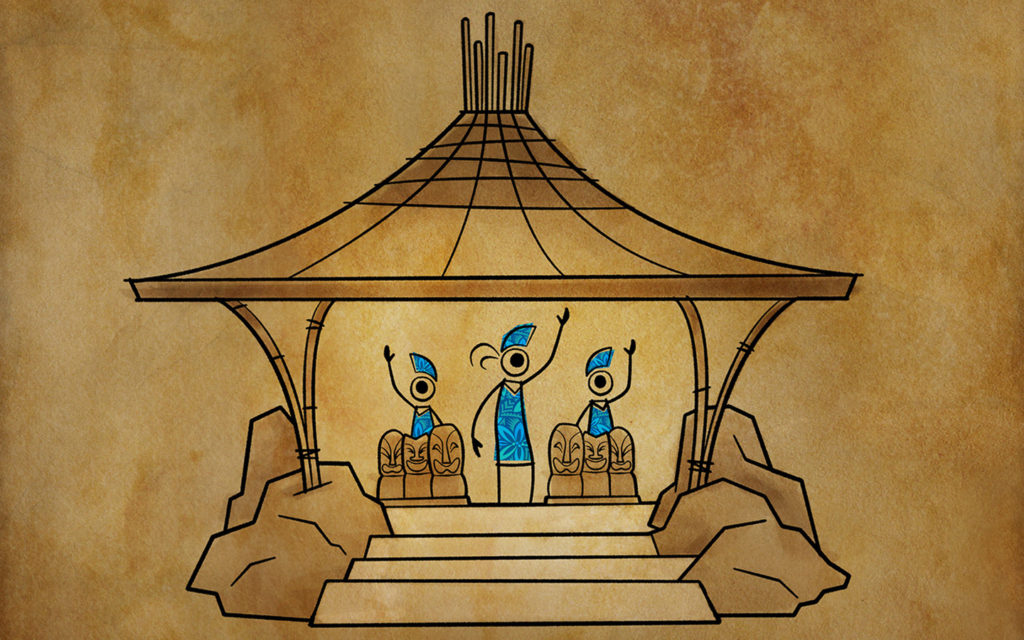 When you come to Volcano Bay, you’ll be welcomed as one of the Waturi family. The islanders have never forgotten the kindness and generosity their ancestors encountered in their journeys across the Pacific. It is that same spirit of friendship that they extend to every guest who visits Volcano Bay.

Upon your arrival, you will be provided with your own waterproof TapuTapu wearable – designed specifically and exclusively for use in Volcano Bay. With its Virtual Line and TapTu Play capabilities, TapuTapu allows you to live on Waturi time and feel as one with the island’s carefree way of life.

Throughout Volcano Bay, you’ll discover a vibrant blend of Polynesian cultures and architecture from across the South Pacific – all inspired by the travels of the Waturi. You’ll also find surprises throughout the park, including Vol – the ancient fiery spirit trapped inside the Krakatau volcano.

Insider tip: You’ll have the opportunity to speak with Vol inside the volcano. But first, you have to find him…

The Waturi believe in living life to its fullest and creating stories through adventures. I can’t wait for you to create your own stories and embrace your inner Waturi when Volcano Bay grand opens on May 25.