There are exciting new things popping up every day at the Walt Disney World Resort in Florida!  Join us every week to read about what’s new “Around the Mouse.”  This week’s Walt Disney World news update features: a ban on selfie sticks at Disney parks, fourth of July fun, new menu items at Hollywood Brown Derby lounge and Artist’s Point, extended military discount, and more. 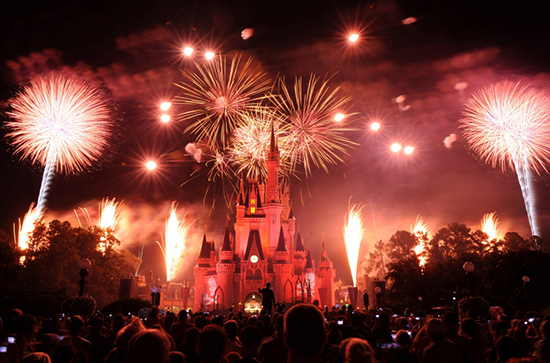 New! Selfie Sticks No Longer Permitted at Walt Disney World Theme Parks: Like many other venues, Disneyland and Walt Disney World theme parks, water parks and DisneyQuest Indoor Interactive Theme Park will no longer permit selfie sticks* effective June 30. Disneyland Paris and Hong Kong Disneyland theme parks also will be included in this policy change, effective July 1. When selfie sticks are observed at bag check, a Cast Member at bag check will escort the Guest to Guest Relations. Guest Relations will tag the device and give the Guest a claim ticket to retrieve it upon exiting the park. If a selfie stick is discovered inside the park, Cast Members will explain the policy and escort the Guest to a regional Guest Relations location where the device will be tagged and the same process is followed. There are posted signs and guests are being handled informational pamphlets in the parking lots explaining the new policy.

New! Fun for Fourth of July at Magic Kingdom: Disney’s “Celebrate America – a Fourth of July Concert in the Sky,” a vibrant fireworks display will paint the sky above Cinderella Castle, and Guests will be immersed in a red, white and blue pyrotechnic revue. This offering will take the place of “Wishes nighttime spectacular” beginning at 9 p.m. Beginning at 6 p.m., Guests can rock their stars and stripes at a DJ Dance Party in Frontierland. In addition, “Disney Festival of Fantasy Parade” will be performed twice on both days at noon and 3 p.m.

New! Fourth of July Entertainment Schedule: Celebrate the red, white and blue at Epcot! Guests can enjoy additional entertainment on Saturday, July 4 at the American Adventure: Voices of Liberty Fourth of July Concert shows at America Gardens Theatre, at 12:20, 1:45 & 3 p.m., Meet Patriotic Chip & Dale intermittently from 12-5:30 p.m. and “Illuminations: Reflections of Earth” will feature a special Fourth of July finale beginning at 10 p.m.

New! Givenchy Gift with Purchase Event: The Givenchy makeup line is celebrating 10 years! Natural or dramatic, matte or shimmer, cream or powder, Givenchy’s makeup line is for every occasion. From 11-9 p.m. on July 1-5, Guests who visit Plume et Palette in France and purchase $100 or more in Givenchy merchandise will receive a complimentary Givenchy pouch and brush set. Complimentary engraving will be available July 2 – July 4 from 1:30 – 7:30 p.m. for Guests who purchase any Givenchy merchandise.

New! July Fourth Entertainment at Disney’s Hollywood Studios: The “Coolest Summer Ever” Dance Party leads up to a “Rockin’ 4th of July Celebration,” as the sky above Disney’s Hollywood Studios ignites in a shower of shimmering light for a pyrotechnic, rock ‘n roll road trip across America. The DJ kicks things off at 5:45 p.m. and keeps the party going until fireworks time at 10:15 p.m.

New! Celebrate Fourth of July with New Cupcake: Disney’s Hollywood Studios celebrates Fourth of July with a specialty cupcake! The Independence Day cupcake is made out of apple pie and will be available July 3-5 at the following locations: ABC Commissary, FairFax Fare, Backlot Express, Studio Catering Co., Pizza Planet, Starring Rolls, Rosie’s All American Café, and The Trolley Car Café. This treat is included in Disney Dining Plan.

New! New Menu Items at Hollywood Brown Derby Lounge at Disney’s Hollywood Studios: The Hollywood Brown Derby has recently added new small plates and beverages and has a newly renovated outdoor bar. New small plates include grilled Bloody Mary-marinated shrimp and chorizo and heirloom tomatoes on toasted ciabatta with garlic herb butter and a new seasonal soup — Zellwood Corn Bisque, served with a corn and lobster fritter and Ancho chili oil. Or share the Crispy Bites, featuring parmesan and goat cheese risotto sticks with a peach-habanero chili sauce, Brie with a sweet onion and orange jam, and affiné blue and mushroom arancini with a fig and balsamic dip. These new tastes join favorites like The Famous Hollywood Brown Derby Cobb Salad, Derby Sliders, and Artisanal Cheeses and Charcuterie Board. New additions to the drink menu include a Mint Julep made with premium reserve bourbon; the new Bloody Mary turns up the heat with pepper-infused vodka and a garnish of olives, spicy pickles, and pickled green beans; a Champagne Cocktail with sweet and floral elderflower liqueur and Fairytale by Iron Horse Celebration Cuvee (exclusive to Walt Disney Parks and Resorts); Sangria; and, the Grapefruit Cake Martini — a delicious twist on the classic dessert. 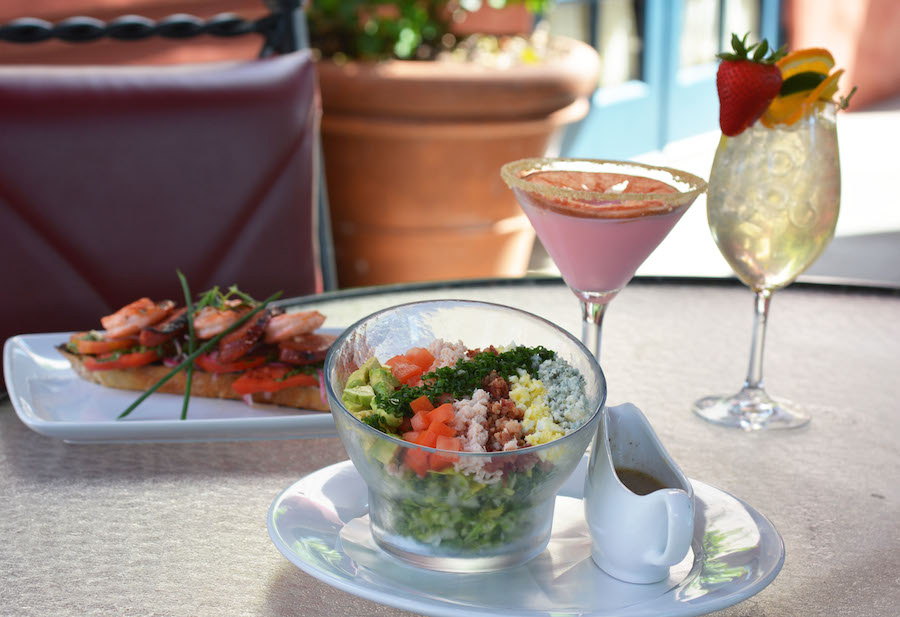 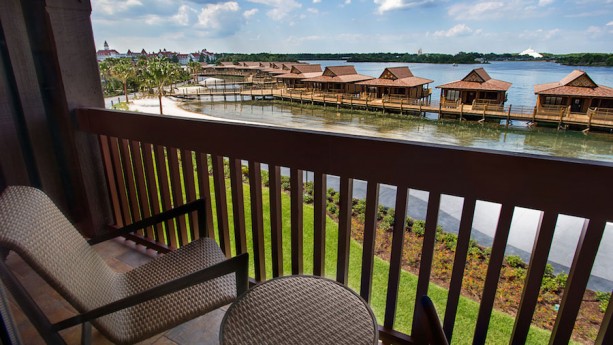 New! New Chef and Menu Items at Artist’s Point at Disney’s Wilderness Lodge: Disney’s Wilderness Lodge takes guests on a journey to the beautiful Pacific Northwest, with design inspired by turn-of-the-century National Park lodges. Chef Michael Gonsalves is new at the helm in the Artist Point kitchen, and is having fun with a menu that is focused on the America’s Pacific Northwest. Regional dishes such as Dungeness crab cakes, steamed mussels, Cedar plank salmon and wild-caught prawns and halibut are on the menu, but Chef Michael is having fun with new tastes, too. A dashi-braised short rib starter is served with kombu turnip pickles, daikon and wild greens. Charred field asparagus with Berkshire prosciutto, mustard vinaigrette, and foraged greens also graces the menu. And he showcases produce from the “Land” at Epcot as well with offerings such as the “Land” Greens Salad featuring Masumoto Peaches, and Seed Granola. Favorites such as the smokey portobello bisque with crispy shiitakes stays on the menu, as well as the buffalo strip steak from North Fork Canada. For summer, Chef Michael is adding a new cheese and house-made charcuterie boards. Every dish on the menu gets a wine pairing from sommelier Alvin Burrill, with each selection from Washington or Oregon. 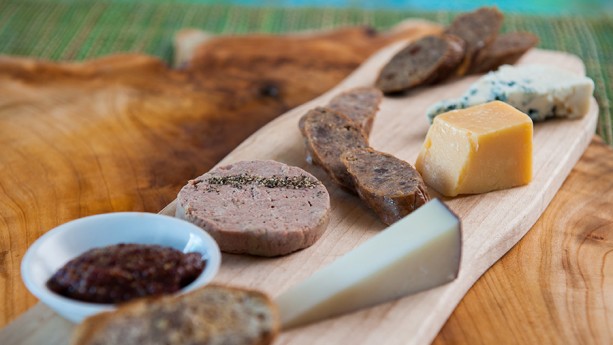 New! Fitness Center, Salon and Pool Refurb at Disney’s Coronado Springs Resort: The La Vida Health Club, the Casa de Belleza Beauty Salon and the Casitas leisure pool will be closed beginning Sunday, July 5, through Monday, Oct. 12, for routine refurbishment. During this time, the feature pool and other two leisure pools will be available. A temporary fitness center will also be available for Guests in the convention center with the exception of the following dates: July 26–Aug. 1, Sept. 20–24 and Sept. 28–Oct. 12..

New! Independence Day Activities at Disney’s Old Key West Resort: Recreation Cast Members at both resorts will be celebrating Independence Day with our Guests with funfilled activities including pool parties, contests, arts and crafts and a golf cart parade at Disney’s Old Key West Resort. Specialty food and beverage offerings will be available for purchase.

New! Selfie Sticks No Longer Permitted at Walt Disney World Theme Parks: Like many other venues, Disneyland and Walt Disney World theme parks, water parks and DisneyQuest Indoor Interactive Theme Park will no longer permit selfie sticks* effective June 30. Disneyland Paris and Hong Kong Disneyland theme parks also will be included in this policy change, effective July 1. When selfie sticks are observed at bag check, a Cast Member at bag check will escort the Guest to Guest Relations. Guest Relations will tag the device and give the Guest a claim ticket to retrieve it upon exiting the park. If a selfie stick is discovered inside the park, Cast Members will explain the policy and escort the Guest to a regional Guest Relations location where the device will be tagged and the same process is followed. There are posted signs and guests are being handled informational pamphlets in the parking lots explaining the new policy.

New! Disney’s Armed Forces Salute Military Discounts Extended: Walt Disney World Resort and Disneyland Resort are extending the special pricing we announced last July on theme park tickets and accommodations for active duty and retired U.S. military personnel at domestic sites. The discounts are extended through mid-December. Tickets must be purchased by Dec. 17 for Walt Disney World Resort, Dec. 18 for Disneyland Resort and used by Dec. 20. As Disney fans know, support for the U.S. Armed Forces is a long-standing Disney tradition. We expect more news to be coming soon regarding the 2016 Military discount program. 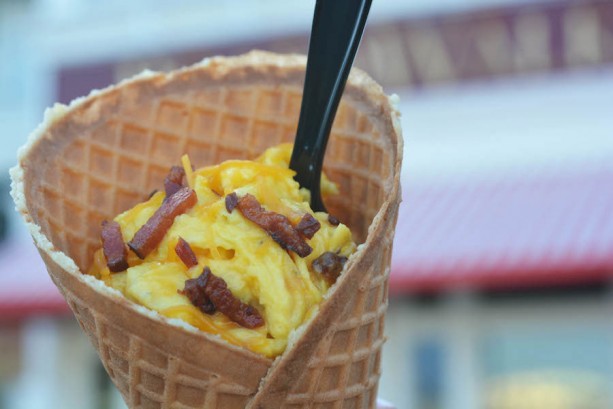 July 1 – 5: Take part in a special Givenchy fragrance event at Le Plume et Palette in the France Pavilion at Epcot.

New! Patriotic Merchandise for July 4th: The newest retail MagicBand features Mickey Mouse standing in front of an American flag. This limited release item has a retail of $24.95 and can be found in select merchandise locations throughout Walt Disney World Resort. 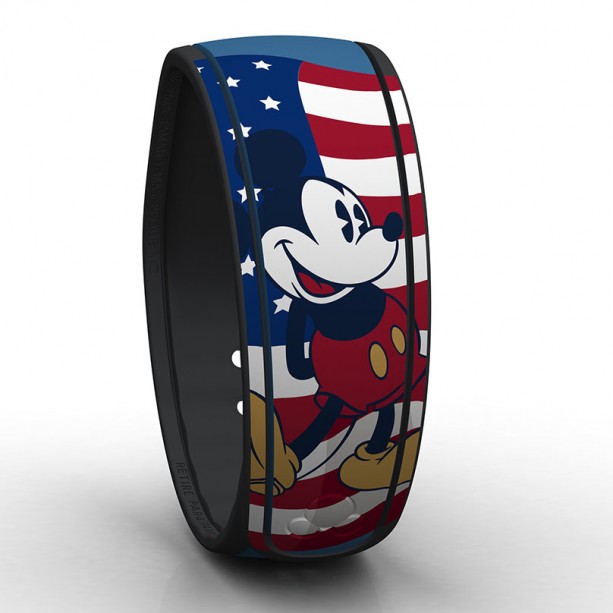 There is a new Fourth of July limited edition pin with Carl and Ellie from Disney•Pixar’s “Up.” This pin has an edition size of 3,500 and will be released at Disneyland and Walt Disney World Resorts, as well as a new open edition Minnie Mouse bow decorated in red, white and blue. In terms of apparel, you’ll find new shirts including a tank top and short and long sleeved options. These designs will be similar in both California and Florida with the only differences being the name of the Disney Resort destination. At Heritage Manor Gifts in World Showcase at Epcot, you will find some unique Americana items including shirts and USA Charm Bracelets by Alex and Ani in both gold and silver.

Siera is a travel agent with Destinations in Florida, an authorized Disney vacation planner. She would love to help you plan your next vacation at no cost to you. Request your free, no obligation quote on the right side of the page or email siera@destinationsinflorida.com for more information.